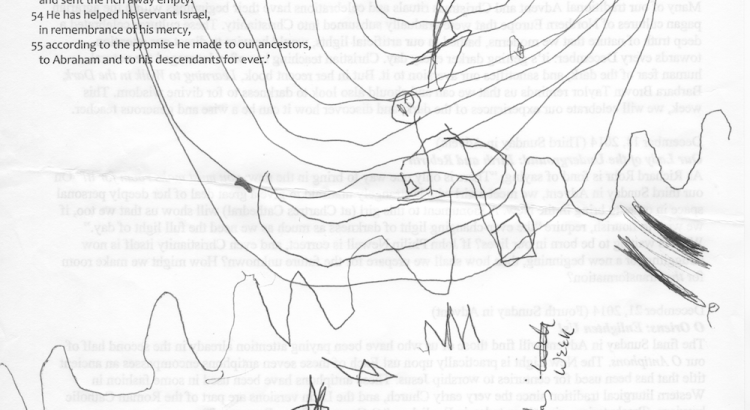 Its been a while since I have posted.

I have been practicing my medical resiliency skills after my talk at SXSW.

Let me start by explaining what resiliency skills are and why I needed them after my brain injury.

The picture for this post is one that my son drew while we were listening to a talk about dealing with life’s ups and downs.

If you look at the picture for the post, you will see that my son’s drawing has a stick figure moving up the ups and downs (in the middle of the picture).

I chose to use this picture for my SXSW talk and for this blog post because it looked remarkably similar to a picture my speech and language therapist, Liz Joiner, at St Davids Hospital here in Austin drew for me on a white board when I started rehabilitation with her.

At that time, she explained that life has its ups and downs.

She told me she would teach me strategies to help me:

2) manage them in such a way that my life got better (which is upward in the picture).

From my perspective, my son’s picture represents the path that every person hopes so that the stick figure applies to everyone trying to manage their lives.

The picture Liz drew was one for me in particular.

The difference between me and every person is that learning and practicing these medical resiliency skills are critical to my life.

They may be optional for those who don’t have the medical and functional issues I have after my brain injury.

Before I got to inpatient rehab with Liz over 3 and 1/2 years after my injury,  I couldn’t manage my life despite all my best efforts and hard work to do so..

What my life was like post-injury before I was taught medical resiliency skills:

Usually, I wouldn’t notice I was in one of life’s downs, until afterwards, because I lacked the ability to anticipate what would happen next.

Life is ups and downs.

However, once I hit one of life’s downs, it would often turn in to a downcycle where things kept getting worse.

And, that cycle would often lead to a tailspin downwards.

As I say in my speeches,  I was working really hard to manage my life to keep my life from going from bad to worse.

I was working much harder than I had ever had before in my life.

It took more energy to do basic things because my brain was damaged.

So I was often too tired to function.

And my cognition was impaired.

Although I did not understand it at the time, my fatigue made my cognition worse.

Being in a tailspin required added urgency to level out the plane (and my life) so that I could function.

I couldn’t manage the downs.

Once I started in to a tailspin, I would have difficulty sleeping (too tired to sleep!) and so my cognitive symptoms would get worse because I was not getting sleep.

I would often get depressed that I couldn’t manage my life (no surprise there, who wouldn’t!)

Eventually, my immune system would get depressed.

With a depressed immune system, I was more susceptible to colds or flu, especially in the winter in Washington DC.

Once I got better, I had less energy and enthusiasm for starting over and trying again to get my life going, knowing the tailspin I just had.

Now I can see that it’s harder to get out of a tailspin once it starts.  It takes energy and brainpower and good doctors.

So, I am very grateful that I was able to get out of tailspins eventually with the help of my medical doctors and complimentary care doctors.

However, it was no life at all, living from one tailspin to another.

How would a tailspin get started?

Usually through unintentionally overdoing it.

Sometimes, events outside my control would through me into a tailspin.

For example, I had to get Independent Medical Exams with doctors assigned to me by insurance carriers during the first few years of my injury.

Often those exams were so taxing on me that I they would throw me into a tailspin.  (More on that later!)

Back to medical resiliency skills.

1) Be aware of life’s ups and downs and how they can worsen with injury or illness.

2) Learn to plan for life’s ups and downs.

3) Develop “go to” strategies to employ to prevent things from getting worse in a downturn.

(Some of these “go to” strategies are general, some may be unique to you)

4) Develop strategies to even out the ups and downs and to keep on going when times are bad.

5) Learn from the last downturn to develop awareness that may be needed to develop better strategies to minimize the next downturn.

6) Learn from the upturns that there will be a downturn, and that is okay.

7) Learn that healing is not linear.  In other words, healing is not a straight shot upwards, its an up and down and the goal is for the ups and downs to go in an upward direction overall.

So that if you drew a straight line through the average mid point, you would find that it moves upwards (representing life is better or easier or more functional)

8) Learning to reflect back at the trend and recognizing how one’s life is getting better or easier or more functional.

9) Celebrating progress, if there is progress.

10) Getting help (either medical or help with lifestyle changes) if there’s not progress overall.

11) Learning that there may be big setbacks.   Last summer was an example for me of a major medical setback.

I pushed hard to do the speech and I knew that “the piper would need to be paid”.   In other words, that I could ask my brain to push a little harder than I normally do (but not too much), and I would need to compensate for that extra pushing in the short term by resting and relaxing until I replenished myself and my brain afterwards.

Let me explain that further.

Since I was preparing a new speech for a new audience (a smart and tech-savvy audience), I knew I needed lots of support and lots of help from my village as well as support with developing the speech.

I had great help from two writers in particular, Thatcher Freund and Katie Matlock (more on this later).

But because I was doing something new, I couldn’t anticipate ahead of time all issues that would arise in preparing a new speech (more on this later).

Looking backwards, I was not able to anticipate how much bandwidth (energy and brainpower) it would take for me to do my part in preparing the speech and giving it.

After the speech, I have needed to rest and practice my medical resiliency skills.

Do you know about medical resiliency skills?

Do you use some of these skills but do not call them resiliency skills?

Which ones do you use?

How did you learn these skills?

One thought on “Practicing Medical Resiliency”