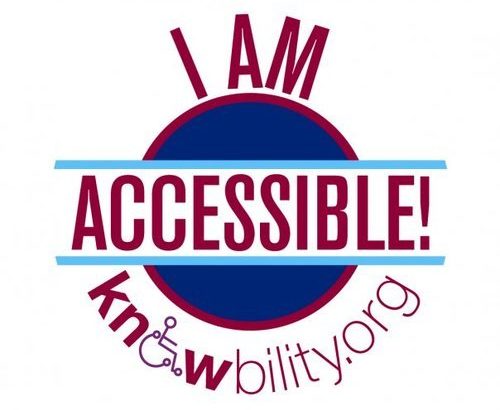 I first heard about the great work that Knowbility does through Dr. John Slatin, Sharron’s former co-author on a textbook on better cognitive design.    John was the Director of the University of Texas Institute of Technology of Learning.

I am a PhD economist and was working for a think tank in DC on economy/ environment issues.  In June 1997, I had a concussion/traumatic brain injury in a car accident. I sought medical care and as I tried to return to work, I wasn’t successful because I couldn’t read, the computer affected my sleep/wake issues, and I couldn’t manage my daily life. I was treated for headaches (but no cognitive therapy) and was told I had a limited window of recovery.

On the advice of a doctor, I turned off electronics and did my best to find my way to rehabilitation which was a slow process.  Most of my doctors were telling me I would have limited time for my brain to get better.

Fast forward 3 1/2 years, I was able to get cognitive rehabilitation at St. David’s Rehabilitation Hospital after I moved back to Austin.

St. David’s Cognitive therapist, Liz Joiner, turned my life around and gave me the building blocks to manage my life.  She got me back on the computer with compensatory strategies, and together we looked for a volunteer rehab job in technology, and for someone who could help me find solutions to the sleep/wake issues that I had after the concussion.

That’s where John Slatin came in.

John provided tech and design solutions such a:

-moving me to an LED screen from my CRT screen,

-trying to see if a screen designed to be accessible for people with low-vision would help me (I ran screaming from it!),

-trying to see if learning Jaws (technology designed to help people who are visually impaired) would help me, and

-getting me interested in helping finding a way to solve the cognitive frontier so that people like me could use the computer more readily and more easily.

John soon launched my public speaking career by giving me a spot to teach about cognitive disabilities in his class on Accessibility and the Internet.  When we moved back to the Washington DC area, he flew me back to teach to his class for several years.

After we returned to Austin from DC in 2011, I reached out to Sharron Rush and told her the progress I had made in my recovery.  By that time, I was the first non-military, non-pro-athlete person with a concussion to speak on the Congressional Briefing Panel for Brain Injury Awareness day and had spoken internationally about recovery from concussion.  While I had had a lot of functional recovery (I could be a mom and I could drive), I still had issues with how the computer screen affected my sleep/wake cycle and knew it was a barrier to my increased productivity at home and on the small consulting jobs I was now able to do.

I started looking for ways to volunteer for Knowbility given that my husband and I were the parents of a toddler.  I still had some fatigue and cognitive impairments which made my day challenging and I wanted to keep a positive attitude amidst the frustration.  I wanted technology to empower me rather than set me back, so it was a tough balance.  Sharron encouraged me to enter the OpenAir competition.

At that time, my husband had created a website for me, www.aplasticbrain.com.   Each week, I tried to write about my recovery to give hope and inspiration to those who were trying to recover from a concussion.  I wanted to make my website accessible for people who had eye-brain processing issues after concussion, and for other people with brain injury.  Most websites were inaccessible to me, including those imparting information about concussion, because they were too busy, formatted poorly, and I would get lost trying to navigate them.

I entered my website into OpenAIR in 2013 and worked with an amazing development team.  Joseph O’Connor was assigned as mentor and he was interested in cognitive disabilities.  Joseph and the design team who I worked with ( a team from Cognizant in India) would translate my ideas overnight since they worked while I slept.

I am so proud to tell others about the hard work we did to create a site that is easy to navigate, simple, and has a color scheme that is soothing.  Several years later, I’m still learning how to write more accessible paragraphs and post pictures and describe them for someone who isn’t sighted. But that’s one of the wonderful things about volunteering with Knowbility: I have learned so much in regards to how others with (and without) diagnosed disabilities experience the world.

Last season I volunteered to share lessons learned at OpenAir and to mentor another non-profit team. I always attend the kick-off ceremony and the finale when I can, because it’s so exciting to watch how each year the contest grows, becomes more international and inspires designers and non-profits alike.  Last year, the increased enthusiasm among participants at the kick-off was palpable.

Each year, I speak about my cognitive impairments and technology at John Slatin/AccessU.  It’s an opportunity to give back.  Since I don’t look like I have cognitive impairments, it’s been a blessing to learn increased awareness about myself and learn increased strategies to empower me further.  This year I want to teach about cognitive reserve and brain processing, so I’m already looking ahead to work with Knowbility on that for May 2017.

It feels good to be part of an organization that has solutions.  We now know that 90 % of people who don’t get better from concussion have neuro-optometric/vestibular issues like mine.   Solving the issues of cognitive design for people with concussion is paramount to helping them return to health and back to work.

Thanks to Knowbility, I’ve been part of the solution through modeling and teaching about what’s worked for me.  I can spread the word and I am able to help others get the help they need.

My thanks to Marine Menier and Jessica Looney for editing this blog post!